It’s been one month since my last post. I stepped down as President of the Bible Society of Malaysia on May 10 after completing a maximum 5-year term. On the very next day, I flew to Munich to chair the annual meeting of the Global Council of Advocates International, the worldwide organisation of Christian lawyers. I managed to catch holidays in Salzburg and Prague and here I will tell a travel story.

A most moving experience happened in Prague, Czech Republic. Prague has the appearance of a fairy tale city. There is so much of glitz to see but what caught my imagination was a tour to Terezin Concentration Camp and a walk through the Jewish Quarter of Prague. During 11 idyllic days in scenic Europe, the discrimination against religious minorities in Malaysia was never far from my mind. I wanted to see a facet of Prague that dealt with how discrimination in their society festered until it led to tragedy.

The Jews came to Prague, capital of Bohemia, in the 10th century. They were resented by the local population. The reasons were many. They were ethnically and culturally different. Often, that is enough to raise fears. Perhaps, the key reason was economic. In spite of restrictions placed on Jews, they prospered. Retrictions on trading and commerce only served to spur the Jews to succeed to the extent that they became money lenders to Europe. Nobody loves a money lender. Shakespeare in his “Merchant of Venice” portrayed the Jew as an unscrupulous money lender.

Prague’s rulers confined the Jews to a ghetto. They could not live or trade outside a walled city. They had to be indoors by night. This restriction on their movement meant that they could not take their dead for burial outside of the ghetto.

The picture above is taken inside the Jewish Cemetery. Prague’s Jews had to bury all their dead in the cemetery even though it was fully used. Over a period of 300 years,  20,000 people were buried in a small cemetery meant for only a few thousand. Up to twelve persons were buried in one spot, one on top of another. Gravestones jammed up around each other marked a final resting spot shared by multiple corpses.

In 1389, the church spread a rumour that the Jews had desecrated the host (ie the wafer and the wine used in the Eucharist). Some children had thrown stones at the host as it was carried past the Jewish quarter in a Good Friday procession. The Jews were blamed by the Christians for offending the religious sensitivities of the Christians. It did not matter that it was not true. People believed it. Or rather, they wanted to believe that it was true. It reminded me of the news back home just before we left. At a conference in a university, Christians were blamed for various ills in the Muslim community. Does it matter that it was not true?

Anyway, on Easter the Christians of Prague attacked the Jews in their ghetto. 3,000 Jews were massacred. As a result many Jews left Prague. Later, Bohemia’s rulers would regularly issue decrees ordering Jews to leave Prague. Go back where you came from! This is a cry that is always heard wherever discrimination rears its ugly head. It was only during the rule of some of Prague’s liberal rulers that the Jewish population in Prague recovered. Yet, for Jews who stayed, they had to live with a host of discriminatory laws regulating their private and social lives, trade, education, etc.

The ultimate discrimination took place during the Second World War. Hitler decided that the Jews was a curse to the purity of Europe’s Aryan races and therefore shoud be exterminated. Prague played an important role in Hitler’s plans. All the treasures and artifacts plundered from the Jews all over Europe by the Nazi Armies were ordered to be sent to Prague. Hitler had planned to use Prague’s Jewish Quarter as a museum of the Jewish people after he had exterminted them. That is why the Jewish Museum in Prague which is spread out over half a dozen synagogues and ceremonial halls has the best collection of Jewish treasures and museum pieces.

The Nazis sent Prague’s 70,000 Jews to live in another ghetto, the walled city of Terezin about 60 kilometres north of Prague. Terezin was built one hundred years earlier to protect Prague from an invasion from the north by Prussia. The attack never came and a smaller fortress a few kilometres outside Terezin was used to hold political prisoners of the Austrian Empire. The Nazis used the bigger fortress, the walled city of Terezin, to house the Jews of Prague and the smaller fortress as a prison and transit point for moving up to 300,000 Jews to the extermination camps to the East like Auschwitz, Treblinka, etc. Throughout the war, Terezin housed up to 144,000 Jews transported from all over Europe. Over 33,000 died in Terezin while another 88,000 were eventually transported to the death camps. 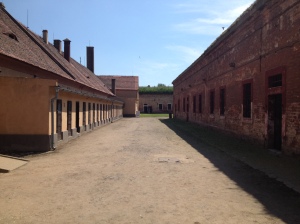 Among the prisoners of Terezin were 10,000 of Prague’s Jewish children. After the war, only 250 survived. The names of all the children who died are engraved on the walls of the school house in Terezin. Writings and drawings by the children adorn the museums there as a testimony to a people who continued to organise education, promote art and culture even though they knew that death was appoaching. When Terezin was liberated by the Soviet armies, over 60,000 of Prague’s Jews had perished. The Nazis cremated as many of the corpses as they could and dumped the ashes in the river. After the war, the incinerators continued to be used for months to cremate the rest of the dead.

Go on a tour of Terezin when you visit Prague. Let it bring you back to the reality of life in this world. Walk through the Jewish Quarter of Prague and see the ugliness of human nature behind the gold and gild of Prague’s towers and monuments.

The drawings and writings of Holocaust victims in their museums is a stark reminder of their existence and their sorrowful struggle against bigotry and discrimination. The movie “The Monuments Men” is based on the true story of a small squad of soldiers assigned to recover the art treasures of Europe looted by Nazi armies. George Clooney’s character gives a speech to his men about the importance of their mission: “They can kill people and destroy their cities. They may be gone forever. Their art is the only evidence that they have ever existed.”

Discrimination begins with a perception, a perceived threat from a minority to the majority’s way of life, identity or self-respect. This perceived threat becomes the basis for discriminatory laws and policies in the name of protection of the majority. The minority is then isolated, disempowered and regulated. The power of the media is called up every now and then to frighten people about the threat posed by the minority. Eventually, when people are told that even laws and policies cannot subdue the minority, the only solution (for the Nazis, the final solution) left is extermination.